This is a rather unfortunate affliction,  as I’m required to fly at least half a dozen times a year for work. And even though one would think becoming a fairly frequent flyer would make me more comfortable, it really doesn’t. I loathe the rigmarole of the airport–the buggy machines at the check-in kiosks, the shoeless chaos of the TSA lines, the rush to make it to the gate on a layover. And the flight itself invokes all sorts of anxiety–I’m that freak on the plane with the white-knuckled death grip on her seat arms during any little bump of turbulence–all linked to the fact that my life is in someone else’s hands, at 30,000 feet above the ground.

I flew to Las Vegas for work. This was my first trip since the one I made last summer to Chicago–the trip I received my cancer diagnosis during.

After six months off the road for treatment, it actually felt good to travel again. I’m not a huge Vegas fan, but my boss and coworkers decided to make this work trip fun, booking tickets to shows and making sure we had a good time after our long days at the furniture market. It has been a long time since I’ve gone out for fun in Vegas, and while I felt much older and dorkier than I did the last time (a good 10 years ago), it was still a good time. 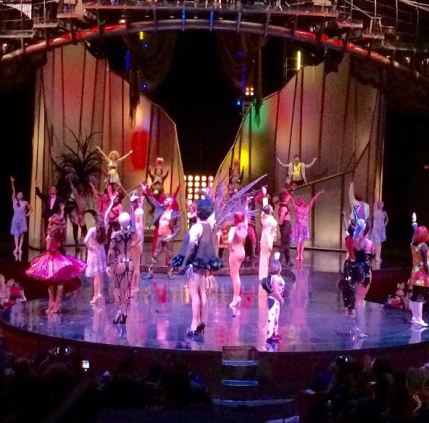 I saw my first Cirque du Soleil show–Zumanity. So fun!

But what was truly remarkable for me during the trip was the flight. Nothing special happened airline-wise, but rather, a change came within me. I still felt the same rush of adrenaline trying to get through the airport, but once I was on the plane, an odd sense of calm settled over me. I fastened my seat belt and rested my head against the window’s edge, taking in the scene of workers scrambling on the tarmac to load luggage and prepare the plane for takeoff. And as we taxied down the runway, instead of sweaty-palmed panic, I felt serene, watching the plane tilt skyward as we descended from the ground. The world below got smaller and smaller, and I was totally fine.

I couldn’t help thinking back to the last time I was on a plane, staring out the window with tears flooding from my eyes. I’d just received that awful news, and my mind was full of the dark fears the word “cancer”conjures. I’ve come a long way since then, and I have changed more in the last six months–both physically and emotionally–than I probably have in the last 20 years. I can unquestionably say that I am probably a thousand percent stronger than I was that day.

A colleague of mine who battled breast cancer more than a decade ago told me something very wise not long after my diagnosis–“You gain perspective.” And she couldn’t have been more right. Not only did I gain perspective as far as life goes–sweating the small stuff is not something I do anymore–I also gained a new sense of courage. I have faced one of the most terrifying things that can happen to a person. I have literally battled with something that could kill me. And I lived. I survived. If I can handle that, a little turbulence isn’t going to rattle me anymore.

7 thoughts on “Fear of Flying”

A journalist's journey through life.